After we left Manila (read all about it here), our next stop was Davao, a stunning part of the country located in the southern province of Mindanao. Its lush, rolling green hills came as a pleasant contrast to what we had just experienced in Manila. Here, we were meeting with Biosand Filters (BSF), again with the intention of building a relationship between they and Surge.  BSF have a wonderful team who were exceptional hosts and a joy to be around.  They picked us up from the local airport and we wasted no time as we began exchanging stories and planning for the week ahead.  It was an action-packed time. We started off by touring the BSF facility, meeting their main team and learning what they are all about. Essentially, they manufacture family-sized water purification filters that utilise a natural biological layer, as well as tiered layers of gravel to effectively remove bacteria and turbidity from the water. All the labour and materials are sourced locally, thereby contributing to the local economy and fitting with Surge’s model of supporting local communities with water.

We conducted our WASH training several times in the nearby Marilog district.  First we visited an elementary school in the mountains. This was our first taste of rural Philippine life, and, as we had expected, the living conditions were considerably worse than in the city.  The school was small, rundown, and was incredibly basic that it really didn’t have much beyond the four walls that encompassed each room. We arrived early in time for the morning flag ceremony (national anthem and raising the national flag) 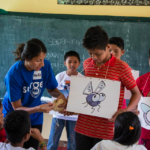 and were greeted by three very adorable girls who ran up and gave us each a hand-made necklace with a local flower. We then introduced ourselves to the rest of the children at the flag ceremony and then broke off into our classes. Marita and I, being the two freshman WASH teachers, teamed up to teach together  while the accomplished Shilpa held it down on her own.  This time, we each had a BSF representative join us in teaching in case the children had problems in understanding. Unlike in the cities, the level of English was expectedly not very high in these rural areas, which are actually comprised largely of tribal peoples.  The trainings always go down well due to their game and interaction-based nature and the kids had a blast taking part! To finish we taught them a rendition of ‘happy and you know it’ – water style (translated into tagalog), and then the whole school performed the song at the end of the day.

The next day we gave the training at a tribal village to a mixed adult/child audience, and arrived to a similar reception. These people are not used to seeing many non-Filipinos at all, so we generally always arrived to lots of long stares, but luckily, even longer smiles! This training was conducted in the local village church, which you would probably only realise was one after having been told. After the session concluded, we distributed sanitation kits that we had put together for the families, which included toothbrushes, toothpaste, nail clippers and soap. 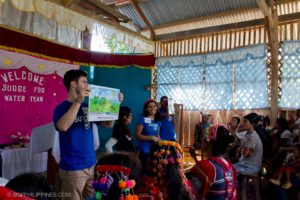 We were then treated to a beautiful tribal song and dance performed by some of the elderly village women. We thought we had better echo the sentiment and turn the day into a little bit of a ‘cultural exchange’, so we fully improvised a dance to a song one of our BSF hosts, Camille, had with brought with her and played it through her handheld loudspeaker! It was a very interesting few minutes to say the least, including some extremely questionable dance moves, but it was good fun and we all laughed together. Without thinking it would have been, it was actually quite a powerful and rewarding experience.

Afterwards, we went up the hill to the area where they live and distributed juices and biscuits to each person afterwards as a little gift. Not surprisingly, I suppose, many people simply threw their rubbish on the ground after finishing. When members of the Surge and BSF teams started picking it all up, it was amazing how many of the locals quickly began to follow suit. At that moment I realised that you cannot underestimate the power of leading by example when you go to such places. It is amazing how you can change perceptions just from a few simple actions that might counter the norm. This is an extremely powerful force.

On our way back into Davao, we stopped at many of BSF’s recipient villages and interviewed several different households, asking the families to describe how the filters had impacted their quality of life. It was astounding to hear, story after story, the profound improvements the BSF filters had brought to these peoples’ lives. Each one of them cited improvements in health (sometimes extremely significantly so), after switching from drinking from their previous source to the biosand filter. A number also spoke of savings they had made because of their biosand filter reducing their need to purchase potable water externally. These testimonials helped drive our decision to partner with BSF. Since our visit, a joint Surge -BSF project is underway in Makatabo, Carmen, Baguio districts in Davao. In the next few months 60 homes and 2 schools will have access to safe water via biosand filters.

Read Phil’s first post about his trip with Surge to the Philippines here.