Home / Uncategorized / Water Towers All Around The US
TweetFacebookPinLinkedInEmail

My last post about rooftop water tanks in cities such as Chicago and New York made me wonder if other places found it useful to store up water as well. (pun intended)

First: Tanks or towers? Tanks are smaller and found on top of high rise buildings. Towers are larger, independent structures of varying shapes, sizes and designs. Both are built high enough to create pressure so water is delivered, simply, via gravity. Tanks and towers serve as back-up systems for a city’s or town’s regular water supply.

Water towers generally hold about a day’s worth of water, according to watertowers.com, and can provide water in case of a power outage. Since they work via gravity, they don’t need pumps to move the water through the pipes, so this can be helpful in emergencies.

The main use of water towers is to provide water during high peak periods, generally in the morning when people get up, use the toilet, take showers and so forth. During low-use periods, water is pumped back into the towers from the town’s water supply to refill the water towers. 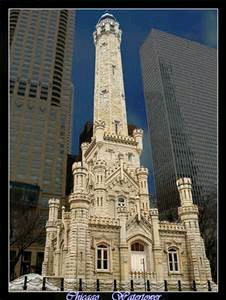 Chicago has a famous water tower, (left), with a history going back to 1869. The water tower and nearby pumping station were the only buildings to survive the Great Chicago Fire in 1871 – and they remain along Michigan Avenue to this day.

The tower was designed to hold a 138-foot standpipe to help pump water downtown, but it became obsolete and was removed in 1911. Designed in Gothic Revival style to resemble a castle, the tower sticks out among the modern high rise structures surrounding it and is now a gallery and tourist spot.

Chicago is not the only city that can boast of having a beautiful water tower. According to The World Geography site, there are 14 significant water towers throughout the world – each with its own unique design and style. 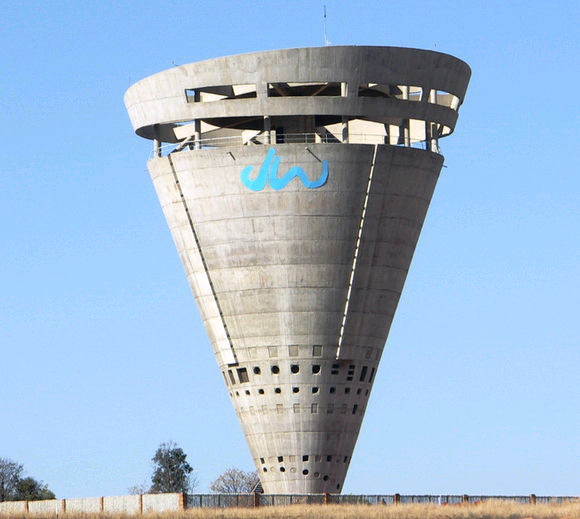 Of the towers on this list, three were in the U.S.- in Milwaukee, Wisconsin; Huntington Beach, California; and St. Louis, Missouri – but the Chicago Water Tower did not make that list. Germany and Poland each made the list twice and other countries highly touted for their towers included Denmark, Finland, Sweden, Japan and Serbia.

Most towers look like castles and are made of stone or brick, somewhat like the one in Chicago. The one in Suffolk, U.K. looks like – and was turned into – a 5 bedroom house. A few towers are modern structures, such as the one in South Africa made of concrete and shaped like an ice cream cone (right), and the one in Finland that looks like a flying saucer (left).

You know you’re near many small towns in the U.S. when you see their water towers, some with unique shapes, smiley faces or designs that give a little personality. 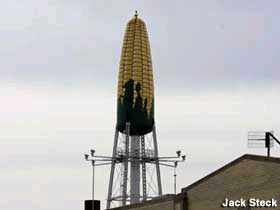 The tower in Rochester, Minnesota looks like a giant ear of corn. You’ll find this and other odd roadside attractions on the site Roadside America, which can help make a roadtrip a little more quirky and fun. You can find the world’s tallest water spherein New Jersey, which also has long-standing website dedicated to the subject of water towers.

But water towers are not only found in mega cities and tiny towns in the U.S.!! Enter your zipcode on watertowers.com – to see photos and details about the water towers near you. I was surprised how many were listed in Minneapolis, where I grew up, and each one has a unique place in the city and nearby neighborhoods’ heart and history.

Rochester residents also get a town joke with their tower: ‘Did you hear they have to take the tower down?’ What, why?!: ‘Because it got worms.’