Before July 4th weekend, almost all Chicago area beaches were closed after a big storm, when the Chicago Park District opened the locks that separate Lake Michigan from the Chicago River, dumping storm runoff and raw sewage into the lake. (yuck!) 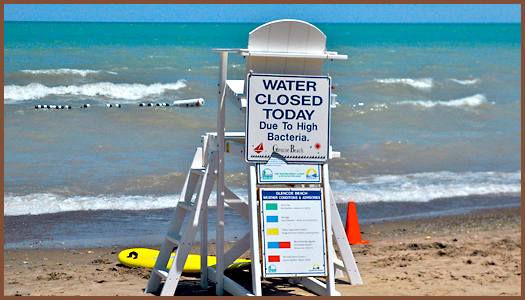 Water quality tests after the locks were opened showed high bacteria levels that made it unsafe for people to be in the water. Just one day later, the ban was lifted at all beaches but two, and swimmers were allowed back in the water.

It makes you stop and think before you get in the water, even after the ‘all clear’ is given.

Area beachgoers can get updates on the Chicago Beaches site, which uses Red, Yellow and Green icons to note if the beach is closed, ‘open but use caution’ or ‘good to go’. This same color system is used at the beaches with flags on the lifeguard stands that let park-goers know if it’s safe to get in the water (no sharks in Chicago to worry about, at least). 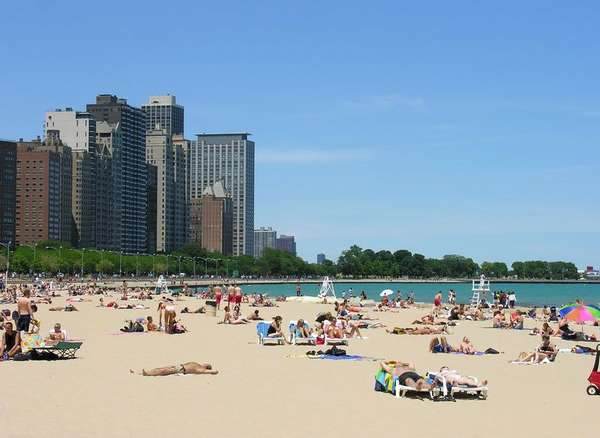 When big storms hit, stormwater runoff surges into local waterways, making them temporarily un-swimmable and inhospitable for humans. With this summer already Chicago’s third wettest in 143 years, high rainfall has put a damper on some summer fun, for sure.

But new technology is helping beach managers keep the public swimming safely. Chicago now uses real-time water quality data at ALL area swimming beaches on Lake Michigan with a system that uses predictive modeling that is tied to weather data and forecasts to predict bacteria levels, as described in this Chicago Park District video. 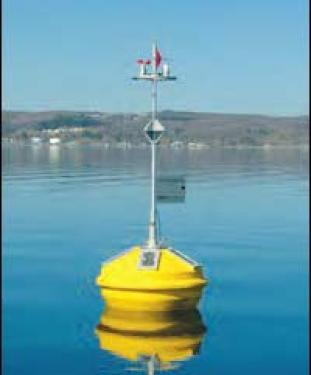 Data is gathered via buoys in the water and weather stations on light poles along the beaches to evaluate the amount of rain and cloudiness of the water to predict bacteria levels in real-time. Otherwise, it takes 18 hours to get actual water quality tests back, so the tests are always a day behind. This real-time tool helps park officials stay ahead of and manage beach closings.

Lifeguards can also update the park district’s site from the beach to show swim restrictions due to rough surf or water quality issues using data from the nearby monitoring system. Beachgoers can check the park district site for details about their favorite or nearest beach before they leave home on the Beach List so they don’t have to wait ‘till they hit the sand to see if the red flag is flying, which means ‘No Swimming’ allowed.

Earlier this year, a local NBC station investigated beach monitoring and closing data from Illinois, Indiana and Michigan (which share the shores of Lake Michigan) and found a significant number of high bacteria levels recorded when beaches were allowed to remain open for swimming.

The NBC investigation, Bacteria Alerts Delayed For Some Chicago-Area Beaches, found 218 cases when unsafe levels of E. coli were found at area beaches – and in 104 of those cases, people were allowed to swim for a full day or more before a ban or advisory was issued. 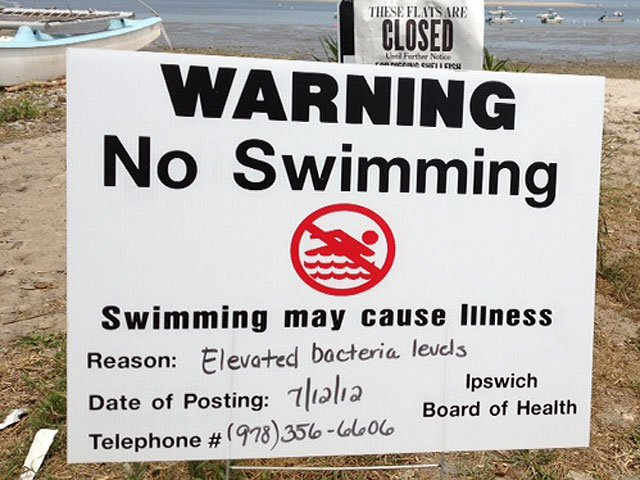 The U.S. EPA regulates waters designated as coastal recreational areas in the appropriately named BEACH Act, passed in 2002, which uses E. coli as the indicator organism to test if fresh water is safe for swimming, bathing, surfing or similar activities. Stormwater, sewage and animal waste are typical sources for E. coli contamination that can cause swimmers to become ill.

Recreational water illnesses can occur when germs come in contact with skin, are breathed in or swallowed and can happen in swimming pools and hot tubs as well as lakes and beaches. According to the Centers for Disease Control, these illnesses can show up as infections of ears, eyes, nose, throat (respiratory) or skin, with diarrhea being the most commonly reported problem.

Chicago Park District officials said the 18-hour delay waiting for test results is a challenge for staying on top of actual bacteria levels (a valid issue). Beach closings typically occur after test results are in, so, in effect after a one-day delay. But the new technology is helping the Chicago Park District (and other cities and states as well) and, in recent years, there have been fewer swim bans and advisories.

Lake Michigan beaches are tested every day for bacteria levels during the swimming season, which is officially Memorial Day through Labor Day. Other inland lakes are required to be tested twice a month. The predictive modeling system now used throughout Chicago costs the city about $20,000 per year (per the NBC analysis) to operate and maintain.

Outside of Chicago, beach closure information is generally reported by a government agency or state health department. For example, In New York City, NYC.gov; in Los Angeles, LA County Department of Public Health;  in Minneapolis, Hennepin County Public Health; and in Ohio,  Ohio.gov has a a Beach Guard site with up-to-date closures and advisories (to name a few).

In May of 2014, New York City launched a free texting service to announce beach closings so area residents can “know before they go” to the beach if their beach is open or closed and get alerts about advisories, closures and water quality issues.

In the recent Testing the Waters report by the Natural Resources Defense Council (NRDC), of 30 states monitored, Ohio had the most contaminated beaches with 35 percent of samples exceeding acceptable levels of bacteria. Illinois ranked 15 out of the 30 states for beach water quality in 2013. And the Great Lakes had the most contaminated beaches in 2013, with 13% of samples testing positive for bacteria from human or animal waste.

The biggest sources of contamination are stormwater runoff and sewage overflows, along with aging water infrastructure. Efforts have begun in Chicago to address stormwater issues and update water infrastructure. But in the mean time, when heavy rains hit, such as before July 4th, sewage has to be released into Lake Michigan, causing additional swimming bans.

Hitting close to home for me, the NRDC report ranked Chicago’s Montrose Beach on the north side and South Shore Beach (south side)  as the most contaminated beaches in 2013. Both beaches contained unsafe levels of bacteria with 31 percent of samples tested having unsafe levels last year. Montrose Beach ranked as the most contaminated beach in 2012.

What makes this beach so bad? The nearby dog beach and bird sanctuaries are at least partly to blame, experts say, as the animals contribute waste directly into the water along the shoreline.

All this beach closing and bacteria talk may make you want to head to a nearby pool instead. But there are contamination issues at area pools (and in hot tubs and spas) to be aware of as well.

Public swimming pools had similar rates of unsafe levels in water tests: 1 in 10 (10 percent) didn’t have appropriate disinfectant levels and 1 in 8 resulted in pool closures, according to the CDC’s Healthy Swimming site (with data from 2008).

What can swimmers do to stay healthy? Try not to add germs of your own to the swimming pool or beach by using the bathroom regularly, not swimming if already experiencing diarrhea, showering with soap before swimming, rinsing off after a swim and not swallowing the water.

Swimming is a great way to exercise and enjoy the summer and officials don’t want people to avoid beaches or pools. Just take a little time to ‘test the water’ first, using updates from your local media, park district, health department or the NRDC report which allows you to click on information for your state beaches) – before you decide to DIVE IN!