Akampurira Robert is the head-teacher at Rwabarata Primary School in Ntungamo district, Uganda. He is one of the best leaders in the community, and his school was able to conduct P.7 exams this year, which students need to complete in order to graduate. He receives his monthly salary on time, and is therefore able to provide for the basic needs of his wife and two children.

You might be confused why this story is about a school where teachers get paid on time and where students are allowed to take their graduation exams. But if you go back to 2015, when Robert “was ashamed to say I am part of Rwabarata Primary School”, you will understand why this is so significant today.

In 2015, Robert began his job as head teacher at Rwabarata Primary School. The school had broken-down latrines “that were being shared by teachers and students…Ntungamo district officials gave us a warning notice of pending closure of the school” because of the unsafe latrine conditions. Due to the low enrollment of less than 200 pupils, and the fact that it was a community school started by parents, the government could not intervene. Robert and the community members “started living in fear of losing our jobs and our children were going back to their life of moving long distances and some dropping out of school.”

Amidst their worrying, their questions were finally answered when Surge along with our partners Living Water International (LWI) considered Rwabarata Primary School for a sanitation intervention. Soon, the school had a six stance drainable latrine that accommodated students with special needs, hand-washing facilities, and training on personal and menstrual hygiene. “The community livelihood begun to improve, and more parents started bringing their children from villages and other neighboring schools to join our school.” The small community school of 109 students grew to 356 students.

When district officials came back to Rwabarata Primary School, they were amazed at the latrines and the increase in students. “They started to guide us on how to register it as a government school,” which would help the school with supplies and salaries. Not only do Robert and his fellow teachers get to work in clean and healthy conditions, but water-borne illnesses like diarrhea, dysentery, and cholera no longer plague the community.

The story of Rwabarata Primary School is not yet finished, though. Robert hopes “of future development where the salary of teachers will be increased” as well as the “number of government paid teachers of the school.” Even though he is head teacher, Robert is quick to say that “all of this came as a result of the sanitation project at school from LWI and Surge for Water. We thank you very much. God bless you.”

Our Approach
Where We Work
Surge for Water USA
Surge UAE 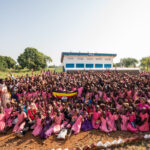 Why You Shouldn’t Take Your Toilet for GrantedClean Water, Missions, Partners, Uncategorized